From Tolerance to Acceptance…. getting through the rough parts

EVERYTHING WORKS OUT IN THE END.  IF IT HASN’T WORKED OUT YET, THEN IT’S NOT THE END…. Tracy McMillan

It takes time… lots of time. It takes time to accept the fact that food has to be shared, that the TV has to be shared, that friends say hurtful things but often don’t know they are doing it, that friends say hurtful things knowingly but only are saying it because they are hurt and scared.  It takes time to learn to roll things off your shoulders, even if they really bother and annoy you… like being teased. or people in your personal space.  Or loud outbursts.  Or changes in plans. Or having to clean the bathroom, cause it feels like you do more work than everyone else because bathrooms are gross and should count three times as much as any other chore.

It takes time.. to get past TOLERANCE, and move into ACCEPTANCE.  There’s a big difference between the two! Often, the folks with autism get there ahead of their parents. 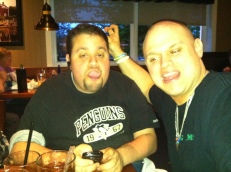 young family member move out on their own, I’ve witnessed the fear and frustration and confusion and uncertainty of whether or not it was the right thing to do.  Remaining at home was  safer for your adult child in lots of ways…it is just so scary to allow the rough parts to happen and not give up.  You know that there are probably going to be more rough times for awhile. And it was easier and less time consuming too, to just have them living at home.  No worrying about staff not showing up. Their clothes matched, their room was cleaner, they brushed their teeth better, and you could keep track of what they were eating. Really, is this worth it??

I began writing the Juniper Hill blog in the winter of 2012, and  my first post was about how much everyone was learning to accept each other, in just one year. Now, two and a half years since we started, there are still rough spots…. but the relationships have grown, and mellowed.  I am not a parent to any of the guys, and therefore have different feelings..  Less worry, less uncertainty.  But for me, I am quite sure. It is worth it.

Brent requested a family dinner at Red Lobster for his birthday last week… so we piled into two cars, made a grand entrance  and took over their largest table for two hours.  We had MORE FUN than anyone else in the restaurant that night, we were pretty sure that everyone wanted to be us.

We ordered fun drinks, our favorite seafood combinations, took silly phone pictures of ourselves, reminisced about past birthday celebrations, listened to everyone else’s requests for THEIR future birthdays …. and clapped to the Red Lobster birthday song for Brent.  And we ate cake, of course!

It didn’t start out like this, our life together.  Wow, not by a long shot.  And the meltdowns and frustrations and arguments still occur, but they’re different now.  They just don’t go as deep, are over more quickly, and are taken in stride by the other guys.  Two and a half years together, and I think the word here really is

acceptance.  It just kind of happened…. over great dinners, fun trips to amazing places, cozy evenings by the fire, helping each other through frustrations, talking over problems, arguing about house rules, coming together and caring about each other in times like hurricanes and power outages, and celebrations of course, celebrations of accomplishments…. holidays… birthdays… milestones.

It was not always easy. There really  had to be lots of flexibility, and patience, and tolerance, and FAITH…to get through the rough parts. There has to be tolerance first, before you get to acceptance.  I’m not sure that it is ever easy, especially with autism. 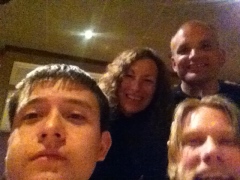 pitcher of iced tea got thrown all over everyone in anger (and panic no doubt)…. and the banging on the walls…holes and more holes… Hey!  that still happens!….. and the teasing over each others likes and dislikes and beliefs… and the stealing…. and the meltdown yelling at midnight… and the phone calls EVERY TIME I was out at night because somebody would always take it upon themselves to order the others around, and this was scary for the more submissive guys…

It’s difficult to write about negative things, it’s always easier to tell happy stories. I worry about discouraging people from taking the chance on independence.  But although these are true stories,  they are also HAPPY stories… just with some glitches….and somehow it puts the ‘lack of tooth brushing’  in perspective! (Keep reminding the staff, the tooth brushing will come).

And we love to tell the ‘pitcher of iced tea’ story… it’s become legend!

The friendships are there. We really know how to have fun together…. and laugh….and we are one big kooky quirky eccentric amazing marvelous family…   It was great to be reminded of that, at Red Lobster last week.