Autism and the Food Police… The right to eat too many doughnuts (or cream puffs). 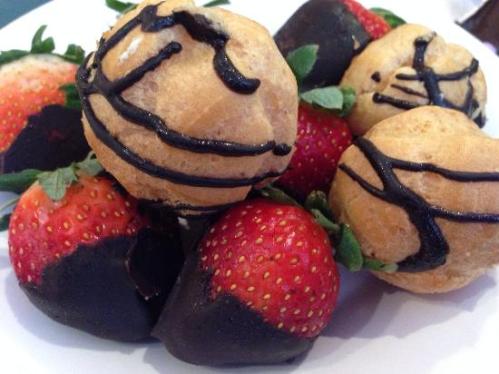 Oh MAN!  Someone just broke open the new box of cream puffs that were defrosting for dessert and ate 10 of them!  And now there are 5 more of us who are going to have to split the remaining 15… sigh.  Such is life here.

I often feel like the ‘food police’ here at the farm… it is NOT my favorite role.  It is a constant goal of mine to find that place where I am not just the ‘bad guy’, that place where I can be the mediator, mentor, and EQUAL housemate… all at the same time.   It is an ongoing effort to maintain the budget while still making sure that everyone’s rights are respected.  Everyone’s.  THAT right there is the key, and what makes this a realistic situation from which everyone learns. There are six of us, we live together, we are friends and housemates.  Everyone here exercises their right to choose, within the constraints of a sharing household.  It’s complicated!  But each day I am reminded that the living situation for the guys here on the Hill is comprised of a set of ideal circumstances where I can allow many issues to take care of themselves at this point. That’s way better than being the Food Police!

Four years ago (FOUR YEARS!  WOW…) this would not have worked.  Four years ago, everyone wanted what they wanted when they wanted it… and had no interest in considering the others.  Food and drink, television, music, bathroom time … all came with an expectation. The expectation that things would remain

the same as they had been.  No one had ever lived in a group situation like this before. The entire gallon of iced tea in the fridge? It could be consumed on a hot day in one sitting… (and without using a glass).  Same with that gallon of chocolate chip cookie dough. And on a chilly day, you could stay in the shower so long that you ran out of hot water, all by yourself. You could blast heavy metal music in the living room whenever you wanted, and you got to pick the car music on trips. And sit in the front seat. And at home when the football game started at 8PM you could pick up the remote and just change the channel…

Actually, all of these things have happened.  Some of them still do.  At first it was frustrating for me. (Having someone walk into the room where I was watching a movie and just change the channel… really?) I struggled with ‘suppressing’ my natural responses… not easy with my blunt, straightforward and LOUD New York upbringing! The guys struggled as well. They struggled with changing their expectations… and at the same time they struggled with all the new, conflicting feelings of ……

1. REALLY REALLY wanting to eat as much as they wanted (and take long showers, and hog the TV…)

2. Not wanting to get ‘in trouble’ from not just me but five other people as well

3. Wanting to please the friends that they cared about (which probably wasn’t ALL of the housemates, but at least some!) and

4.  Caring about doing the right thing.

Some days I can’t believe this, but it is true. Four years really is time enough to learn trust.  With trust comes patience… and acceptance… and tolerance for the things that annoy you… and consideration.  We have all learned that here. When someone forgets these ‘social rules’  now… it’s OK.  Well kinda OK. Almost OK.

Tonight, after the initial cream puff shock (honestly, I was the only one that seemed upset about it…) we talked about being truly independent and learning impulse control even when no one is watching… just because it’s the right thing to do (for lots of reasons.. weight and health … respect for others… budget…). Impulse control, it’s a work in progress.  Here on the Hill, we are mostly still in the ‘not wanting to get in trouble from roommates’ stage.  But now, everyone is somewhat willing to at least admit that that’s the motivation, especially after an actual back and forth conversation based on mutual respect and trust (lectures don’t work!  and they shouldn’t..).    That’s progress, really!

But back to the cream puffs…. In 1990, as a reaction to the excessive amount of control that some service providers exert over the lives of the people in their care, a paper came out in the Journal of Applied Behavioral Analysis about the right of a person with a disability to ‘eat too many doughnuts’ if he or she felt like it, to be balanced with the need for efficient habilitation (habilitation=support from staff)  in making safe and healthy choices.  Here is the link to the article:  http://www.ncbi.nlm.nih.gov/pmc/articles/PMC1286212/

Although dated, the article itself makes some good points.  For a long time however, I have felt that the term ‘the right to eat too many doughnuts’ has been misused by well-meaning non-disabled ‘advocates’ who want to ensure the rights and self determination of people with disabilities.  It seems to me that it is over -simplification to encourage a person with a disability into choices that he or she may not have wanted to make if given more information about the consequences of that choice in the first place. (Yes, this is one of my soap boxes!).

It is a privilege now to be here at the farm, in this community with the guys, where the passing of time has allowed the natural consequences of our choices to be well-understood. And what are the results of this knowledge?  Sometimes we eat our share of cream puffs.  Sometimes, well, we sneak more than our share. And sometimes, we bargain our way into getting somebody else’s share if we have something they want more.  Fair is fair!

And every so often, somebody blows his entire budget, or his diet, on a pig-out party and spends every last cent on large quantities of chips and soda and ice cream.  And the best part? Now the experience is always shared with others …. it’s way more fun that way….and it usually  involves a Dinosaur Discovery or Sci Fi Channel marathon and a big mess to clean up in the living room.  Tomorrow.

and THAT is CHOICE.

I just ate three cream puffs while writing this. I really want more.

15 responses to “Autism and the Food Police… The right to eat too many doughnuts (or cream puffs).”